Where You Can Compose Your Own Story

By Kathleen Grady and Christine Mittaz

In a year pitted against band, Needham High School’s Band program has been able to create something special nonetheless. In the summer, Margaret McLallen (Ms. McLallen to us), entertained the possibility of having a special band piece that was composed just for Needham High’s band ensembles. Through the Needham Education Foundation (NEF) Small Grant, Parent Teacher Council (PTC) Enrichment Grant, and Needham Friends of Music, Ms. McLallen was able to get three pieces commissioned and completed by March. This, of course, would not be possible without the incredible composer, musician, teacher, and overall person, Spencer Parrish.

We met Mr. Parrish last January when he began student teaching at Needham High School. He worked with the bands through our concert in March, and during this time we got to see his passion for music first hand. He even continued virtually student teaching at Needham Elementary School, Broadmeadow, through the start of the pandemic and finishing the school year. But his start with Needham certainly wasn’t his start with music.

His parents noticed his ear for music when he was only five years old living in Rome, New York. He got their attention by walking over to a piano and perfectly playing the song just sung by the chorus at his Baptist church. By eight years old, he was playing the B3 organ for the church. Then at nine, he was promoted to the official music director and Hammond Organist. He began playing the piano at a young age but then picked up the trumpet as well in fourth grade, which he fondly recalls, “commenced [his] life-long love for the concert band idiom” (Parrish). At age 14, Spencer wrote, composed, and produced an entire 13 song R&B album by the name of Relate (available on Spotify, just search Spencer Parrish). Then by his senior year of high school (where he was notably salutatorian), Mr. Parrish set his life goals to be a musician and teacher.

To further pursue his music education, Mr. Parrish attended Berklee as a class of 2020 graduate. Here, he learned from top musicians and worked toward the opportunity to student-teach. He impressively graduated mid-pandemic and is now working as a music teacher in Newton Public Schools.

As a student teacher in Needham, Mr. Parrish observed throughout the fall of 2019 and began taking a more active role in teaching as the new year arrived. He led classes and provided his own insight and feedback as he grew closer with the band, and we became acquainted with his style. Connor Daly, a jazz and symphonic trumpet player summarized this by saying, “He was a great teacher. He had a different approach- but still worked well with Ms. McLallen to teach,” (Parrish).

While we and the rest of the band program were sad to bid Mr. Parrish farewell, our excitement for his future ultimately put us at ease. Little did we know, Mr. Parrish’s career would lead him right back to Needham just months later through the inspiration and planning of Ms. McLallen. When looking back on his experience, Mr. Parrish shared: “My student-teaching experience at Needham High is a moment in time I will cherish forever. I am very grateful for the opportunity to work with the band program again this year, wearing a different hat this time,” (Parrish).

Ms. McLallen first reached out to Mr. Parrish in the summer of 2020 about her idea. She proposed the possibility of commissioning three pieces all composed by Mr. Parrish. With support from largely the Needham Education Foundation, this dream was able to become a reality. The NEF raises funds to provide grants and scholarships for the Needham Public Schools. These grants and scholarships hope to enhance the curriculum, inspiring the next generation of innovative learners. A huge thanks also goes out to the PTC and Needham Friends of Music, who also made the project possible. With the funding in place, Ms. McLallen and Mr. Parrish were now able to focus solely on the musical and educational aspects of the composition.

At first, the task seemed daunting, and Mr. Parrish recalls, “I was initially skeptical of my capacity to deliver three original works for such a large instrumentation in this timeframe. Through the power of careful planning, I did manage to deliver the third piece by the middle of March,” (Parrish). Simultaneously, we students followed Mr. Parrish’s process, and began learning and composing pieces (although much less complex) of our own. Through the guidance of Ms. McLallen and the advice from Mr. Parrish, we saw that the composition process was in fact quite familiar and similar to one we had been doing for years, writing essays.

Mr. Parrish explained the process as coming up with a thesis, or melody. Then developing central arguments that act as supplemental melodies to “connect musically with that main theme,” (Parrish). From there, musicians construct an outline with the general form of the piece. Following the framework, transitions are used to fill in the space between melodies, paralleling the part of an essay in which “it is time to commit words, sentences, and paragraphs to the page” (Parrish). Keep in mind, this process had to be repeated for roughly 25 parts for each of the three pieces, and original ideas do not always make the final piece. In fact, Mr. Parrish, “encountered several false starts and creative roadblocks” (Parrish). When we students started our comparatively easy and basic compositions (yet still quite daunting), it was inspiring to see the same process being done on a much bigger scale.

At the beginning of this school year, the logistics of mid-pandemic band class were certainly unknown. We began the year outside, enduring 40℉ classes, fly-away music, and the constant interruption by gym classes. In essence, the music world of NHS had little to be excited for. However, the introduction of the commissioned pieces provided a unique opportunity that motivated and inspired us to continue working hard despite these challenges. Our personal involvement in the process of the compositions changed the energy of the Needham High School Band. In such a bleak year, it was rewarding to see that the pieces were influenced by conversations we had had with Mr. Parrish. After all, music tells a story; Ms. McLallen and Mr. Parrish worked incredibly hard to create pieces that tell ours. The composition alone is truly fascinating (and challenging to play), and the story is not over yet. The last chapter of this process is a virtual recording that will be completed by the end of the 20-21 school year. With more updates to come, music to be made, and learning to be done, we look forward to sharing our hard work with the community. 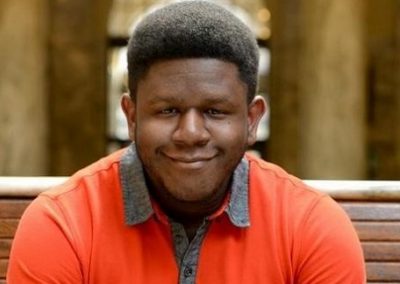 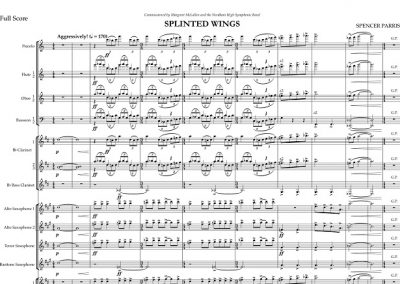 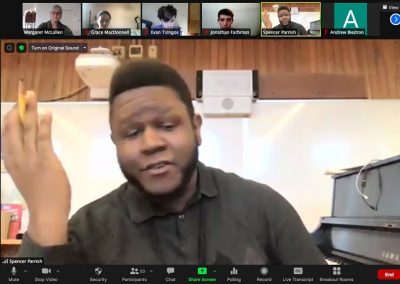